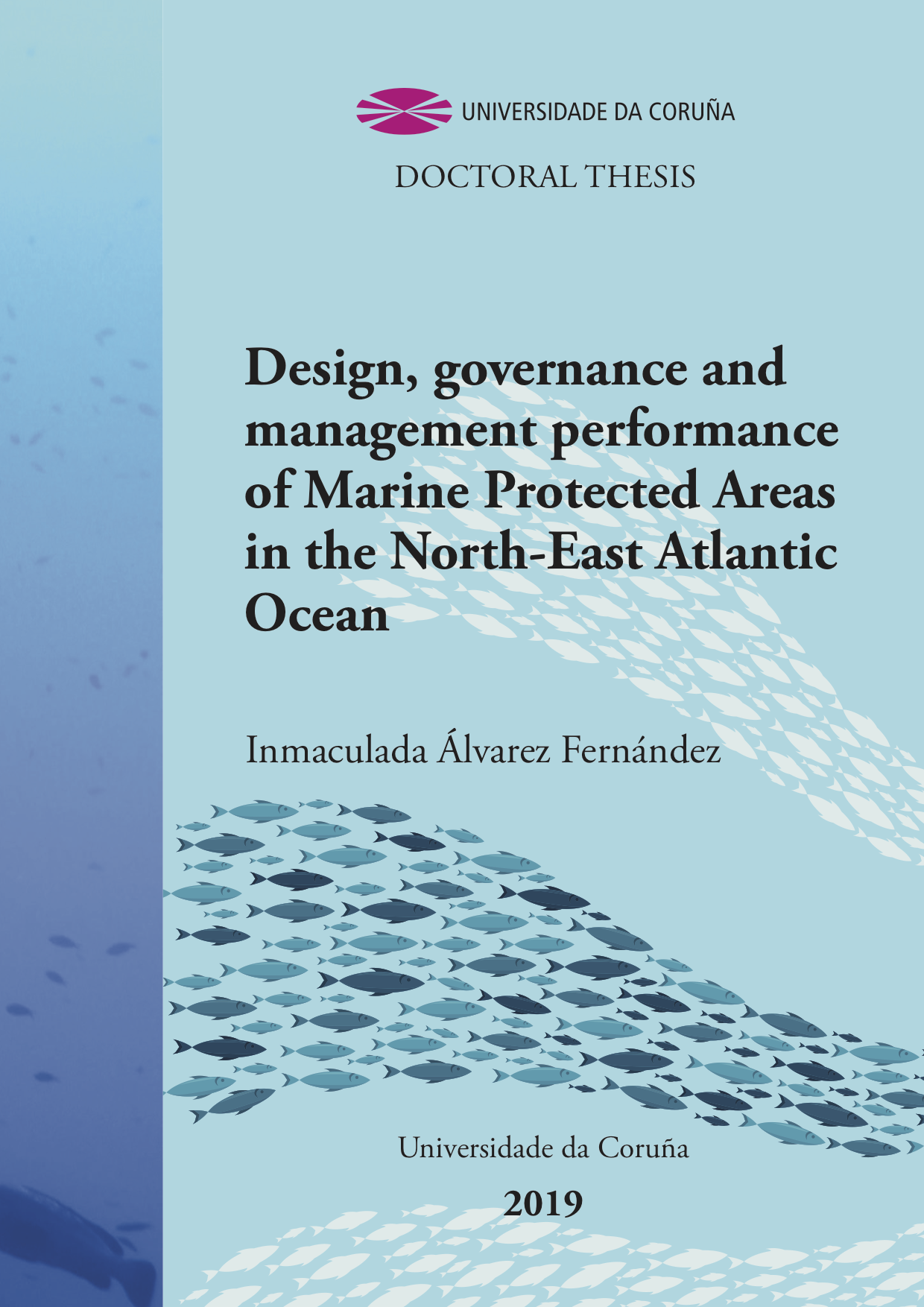 Marine protected areas (MPAs) of Europe, and in particular of the NE Atlantic Ocean, emerge as a key tool to counter the loss of marine biodiversity and ecosystem degradation and to help mitigate climate change, as well as being useful for resource conservation and sustainable exploitation. However, for MPAs in the NE Atlantic Ocean to achieve their goals, a number of processes and factors must work jointly and efficiently. This assembly is highly complex, since not only is it constituted by several processes, but many stakeholders with different interests are also involved. This thesis has described processes (design and implementation of the management plan [MgP], MPA governance and performance) to test the hypotheses that MgP design and implementation influence MPA governance and all these processes affect its performance in four countries of NE Atlantic Ocean (France, England, Spain and Portugal). This thesis was developed through the application of a low-cost method, based on using the expert knowledge and perceptions of managers operating MPAs, a universal source of information that could allow overcoming the usual gaps due to the restrictions in coverage of scientific monitoring and assessments. This knowledge was gathered through surveys carried out with managers with the purpose of collecting their expert knowledge on: (i) the description of the areas and MgP contents; (ii) how the existing management plans were being implemented and, specifically, if there were any implemented actions or activities derived from the MgP; (iii) the socio-economic impact of the MPA on its stakeholder community.

The following are the main conclusions of the research developed in this thesis:

1. In the NE Atlantic Ocean, with a large number of intergovernmental protection initiatives (e.g. OSPAR), the European Union is making substantial effort to create common regulatory frameworks and to jointly implement these initiatives across the different countries.

2. In the four studied countries, the number of designations defined, i.e. legal name under which an MPA is established, is 51 in total, without taking into account international designations. This gets worse in the countries where exist national and regional designations with a lack of connection among them, as in France (n=25) and Spain (n=15). All this suggests that a simplification of regulatory framework could be necessary.

3. Analyzing the designations of NE Atlantic Ocean, and taking into account how each country legislates and establishes those designations, two administrative models can be distinguished: (i) the English model, decentralized according to territorial and offshore waters, and (ii) the model followed by the rest of the countries (France, Portugal and Spain), centralized and integrating international designations into national law.

4. A total of 550 inshore and offshore MPAs were established in the study area, and only 244 MPAs had MgP (managed by 125 management plans [MgPs]). However only 151 of those MPAs (corresponding to 66 MgPs) were working effectively, i.e. the MPAs had the staff and resources required to operate the plan.

5. A continuous increase in the number of MgPs for MPAs in the North-east Atlantic Ocean since the 1980s was shown, becoming exponential since the year 2000 (81% of MgPs (n=125) were implemented between 2000 and 2012), probably motivated by the approval of different directives at the European or global levels.

7. 70% of the 151 MPAs shared an MgP (n=121) and consequently it is not possible to define SMART (Specific, Measurable, Audience- or issue-focused, Reasonable and Timely) objectives for every MPA involved.

8. Delays between MPA designation and MgP implementation occurred in 98 cases of the 118 studied, with a mean period of 10.9 years. These delays are a clear shortcoming in MPA performance because during these periods, MPAs worked as “paper parks”.

9. In 39% of the MPAs (n=118) renewal of operative MgPs delay an average of 4 years respect to the planned date, implying that the duration of operating MgPs doubles the official one that is generally of 4-5 years. Renewal is an essential process to ensure the continuous improvement and innovation in management required for the good performance of the MPA.

10. Stakeholders were involved in the revision phase of MgP design in 90% of the study cases (n=118), while their involvement in the remaining design processes occurred in less than 30% of the cases. Actively involving stakeholders in all phases from the development of the MgP until its daily management is relevant for the long-term success of an MgP.

11. Governance level of 126 MPAs of NE Atlantic Ocean, managed by 57 MgPs were analysed. These MPAs were functioning for a mean of 14 years (39 years of maximum and 4 of minimum). Less than 30% of the cases showed governance capacity, 18% showed operational governance, and only 3% showed efficient governance. It can therefore be concluded that, in practice, 70% can be considered “paper reserves” only.

12. MPAs in the four countries show one common strength in governance: legislation is applied in a proper and robust way. Moreover, France and England also have operational management bodies but substantial improvement is required regarding implementation of management plans in order to achieve effective management.

13. The most critical improvements needed in governance are: (i) routine MPA monitoring and assessment, (ii) increased community engagement in MPA management, (iii) stable funding (which only truly exists in England and Portugal), (iv) an established enforcement system and (v) routine dissemination of results.

14. The MgPs of NE Atlantic Ocean MPAs showed differences among countries but were homogeneous within each country, reflecting the usual top-down approach in the establishment of MPAs.

15. Compliance with the qualitative objectives presented in MgPs was higher than compliance with quantitative ones (87% versus 50%, n=57), and the MPAs that most successfully achieved their objectives were those with regular monitoring.

16. The managers of MPAs of NE Atlantic Ocean (n=35) had a general perception of socio-economic benefits after the implementation of the MPA.

18. The effect of governance is complex and depends more of the correct allocation of effort and resources than of the absolute management effort. In this sense MPAs with modest investments in management could present high performance if they have the right allocation whereas other MPAs with high efforts could underperform greatly.

19. A good design and an adequate implementation of the MgPs have a limited value in MPA performance. However, a good governance could promote high performance independently of an adequate design of the MPA in the early stages. Good governance implies the continuous process of knowledge generation and organizational learning that improves continuously design and management aligning them to the objectives.